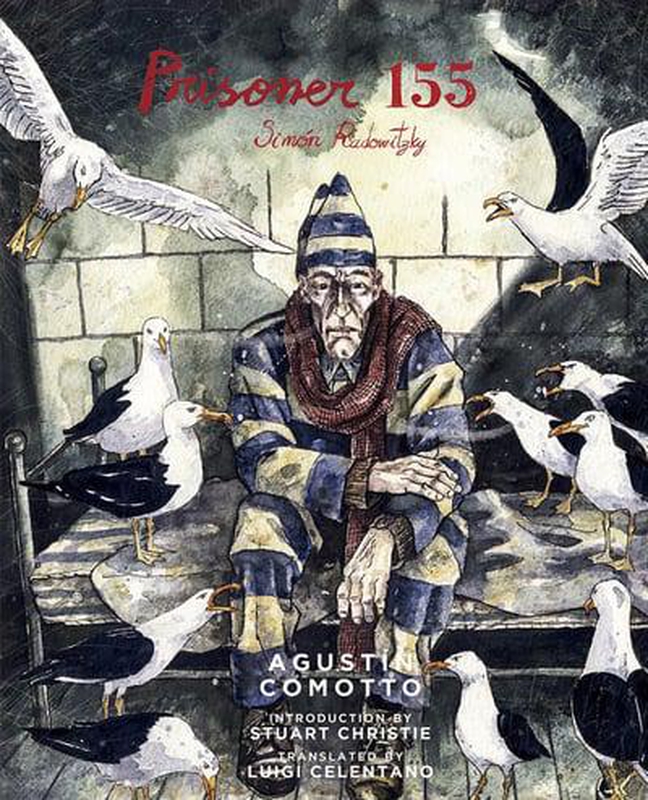 Seeing as, at the time of writing, I haven’t set foot outside my house for three weeks, I’m feeling pretty well incarcerated. But Augustin Comotto’s handsome graphic novel is about real incarceration with a vengeance – the imprisonment, for over two decades, of Ukrainian activist Simon Radowitsky for the assassination in 1909 of a murderous Argentinian police chief. Comotto chronicles Radowitsky’s remarkable life story from the childhood trauma of the pogroms through his growing political awareness, exile, imprisonment, solitary confinement and torture to eventual release, service in the Spanish revolution on the Aragon front and in Barcelona, and then into dignified old age in Mexico. For those like me who have managed little more in a lifetime than the odd spell of leafleting, it’s a sobering example.

And it’s a labour of love, beautifully constructed. Greyscale throughout (with occasional splashes of red at moments of violence or extreme emotion), Comotto’s tonal line and wash drawings, carefully composed as if for camera, create the feel of black and white film, and the flashback structure has a filmic quality too. I found myself desperate to get through it at one sitting, exactly as if watching a film. The drawing is workmanlike and effective, but never showy, which allows the narrative to do the business without distractions. Some moments, especially those of loss or disappointment, are remarkably touching; as the refugees from Barcelona cross the French frontier the dialogue switches off, and the eye follows the long line of grey figures, draped in blankets, trudging silently through rain.

Comotto draws largely on the account of Radowitsky’s life by Augustin Souchy, though where there are holes in the record there is some necessary fictionalisation, as Comotto’s interesting postscript admits. This is sensitively done, though it comes as a bit of a shock to find that the locksmith’s militant daughter Lyudmyla, Radowitsky’s constant inspiration in his darkest moments of torture and despair, is almost entirely Comotto’s creation. Absent pictorially, though present through quotes from her letters, is another inspiration, the wealthy bohemian activist Salvadora Medina Onrubia, who campaigned tirelessly, and successfully, for Radowitsky’s release. Despite their lifelong connection, they apparently met only once, so her invisibility in the strip feels entirely appropriate. Lastly, a respectful nod to the short introduction by Stuart Christie, which is informed, sympathetic and wise.

Prisoner 155 is readily available to buy online. As you sit out your pandemic isolation, pondering on the glaring inefficiencies of the state, the potential of local mutual aid, and the shape of the future, you could do worse than take a bit of inspiration from this impressive tale of one man’s resistance, modesty and commitment to justice.